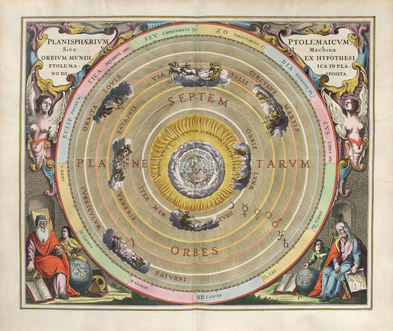 Since ancient times mankind has looked up to the stars with awe and wonder. It was believed that the divine operated from a sublime realm beyond the reach of man, even existing beyond the sphere of the stars. The fixed stars then became a manifestation of certain qualities of the divine; a filter of sorts to the divine current of consciousness and light.

Layer after layer, the "All" was broken into fragments of light that would shine their rays to influence creation according to their station and their nature. While this may seem like an outdated view of the cosmos, it is based on the perspective that the cosmos are a larger body of creation. It sees the Universe itself as a cosmic being, of which humanity is a reflection of and is considered as a "microcosm". 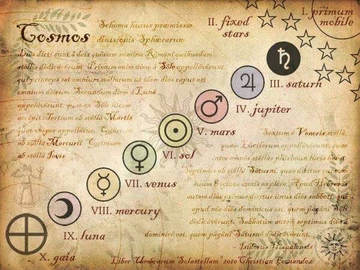 In Traditional Astrology, the model of the Cosmos is depicted in a geocentric state. In this model, the Earth is at the center, and surrounding it are the "Heavenly Spheres". These Spheres begin with the elemental, then move on to the planetary. The order of the planets were designated based on the speed in which they traversed the sky, beginning with the Moon, then Mercury, Venus, Mars, Jupiter and Saturn. After the Sphere of Saturn was the Sphere of the Fixed Stars (including the Zodiac). Beyond this was what was called the "Primum Mobile", which is considered to be the Fiery source of movement of the Cosmos.

Although this may seem to be an outdated and incorrect conceptualization of the cosmic structure, keep in mind that when it comes to the Mystery Traditions, the geocentric model is less about the material structure and order of the cosmos than it is about the nature of influence and correspondence. To that end, no one will debate that we are the center of our own experiences. This means that the entire system is not merely based on a concept of the physical ordering of the planets, but built upon correspondences, observed and tested to be subject to cause and effect. These correspondences play a central role in other Arcane Arts like Alchemy and Magic.

"There are two distinct systems of astrological philosophy. One of them, the Ptolemaic, is geocentric: the earth is considered the center of the solar system, around which the sun, moon, and planets revolve. Astronomically, the geocentric system is incorrect; but for thousands of years it has proved its accuracy when applied to the material nature of earthly things. A careful consideration of the writings of the great occultists and a study of their diagrams reveal the fact that many of them were acquainted with another method of arranging the heavenly bodies."
​- Manly P Hall

The Elements and the Signs
By the elemental nature of each sign, certain qualities are exemplified. Fire signs in temperament are generally seen as enthusiastic, with a drive to express themselves. Air signs seek modes of communication and socialization, and enjoy conceptualization. Water signs have higher sensitivities and emotions, they are the feelers. Earth signs lean towards practicality and caution, making the perfect planners.